Singing is my life: whether it's performing or vocal coaching - and like any professional singer, when you're voice isn't doing what it should be doing it's an incredibly frustrating (and upsetting) thing, especially when you don't know why, and you can't explain it. Well, unfortunately that was a situation I found myself in, and I wanted to share my experience in the hope that it might help someone else who finds themselves in the same situation. 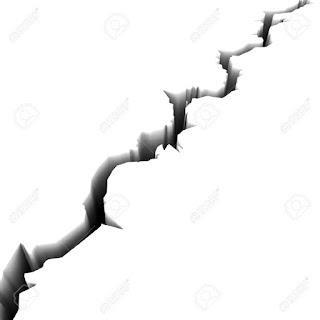 Over the years, those that know me as a singer will know I've had issues and frustrations with a vocal break/cracking right in the middle of my range (The G/Ab/A above middle C, for those musos amongst you). I reached the end of my tether during the summer of 2015, where I found I had no control over when the crack would appear, and just couldn't figure out why. I'm not a belter, I practice good vocal technique having learnt proper warmups and exercises during both my university degrees (and continuing to learn), and I certainly don't smoke. After performing in two shows and hearing and feeling my voice not behave, I really began to freak out - I started questioning my training, and got really upset that I was somehow teaching others bad habits that I didn't know I did, and of course, I feared the deadly nodules.

Unfortunately, at first my frustrations only became more distressing when I took the initial steps of seeing a doctor...


Deciding that I'd had enough I booked myself an appointment with a doctor, and was subsequently even more upset when I was dismissed with the conclusion it was a residual infection from a cold, and was given a prescription for a nasal spray. Now, I really don't believe that the doctor I saw was a bad doctor, I just don't think he grasped how upsetting this issue was for me. I'm a professional singer, and a teacher of singing, I use my voice all day and every day, and now there's something wrong that I can't explain - HELP ME! - If you find yourself in a similar situation, I really do advise following your gut instincts and getting a second opinion, especially when it's something that could be potentially career ending (or at least, it feels that way at the time!) It's your body, you know subconsciously if something isn't right, don't be afraid to push a little harder to get the help you need/want. I did follow my instincts, and subsequently got an appointment with another doctor who, thankfully, really understood how upset I was. He laid out a few options as to what the problem could be caused by, gave me some other medication to try, and got me a referral to an Ear, Nose and Throat Specialist (ENT).

October 2015:
If you never experienced it, let me lay down what and ENT appointment is like - it's WEIRD!! It starts out pretty normally, you have a chat with the doctor about the issues you're having, your voice, your habits, your diet, anything else you spoke to your GP about, pretty standard - then they spray your nose with anaesthetic, and a thin camera gets fed up your nose and down your throat. Even with anaesthetic it's a bizarre sensation, especially when they get you to start making noises (and it takes all the will-power in the world not to gag on the camera!)
- My ENT informed me that me that there was nothing sinister like a polyp or nodules (phew!), but he could see that my vocal folds appeared very dry, and he could see the ever so slight formation of what he called a 'pre-nodular inflammation' - honestly, my heart and brain went from the relief of 'Dryness, ok, I think I can fix that' to the panic and despair of 'Pre-nodule?! What the hell is that? What do you mean that's not sinister??!' in the space of 3 seconds. The ENT gave me some advice regarding food and drink to help with the dryness, and informed me he would be referring me to a speech therapist. I left the ENT appointment with a strange ambivalent feeling: happy to be much more informed and equipped to fix this problem, but still very nervous about the diagnosis - but, at least I now had a diagnosis.

Armed with the knowledge of 'pre-nodules' and 'dry vocal folds', and with the letter informing me of my Speech and Langauge Thearapist (SLT) appointment, I decided that I should start the healing process now - after all, my life and career still had to continue, what with a very active teaching business, a series of big band Jazz concerts, a play and rehearsals for an up-coming musical, 'waiting was not an option'. There were things that I could do that wouldn't interfere with what the SLT would teach me. My appointment letter came with a questionnaire I needed to fill in for the appointment, and in filling it out I came to the conclusion that doing a full review of myself would be rather beneficial. I drew up a time line, looking back at significant times in my life and assessing what my vocal quality/range was like vs what was going on in my life, to see if I could pin-point the exact moment that the 'cracking' issue reared it's ugly head. I noticed a few obvious moments that probably contributed to the problem at hand:

The other thing I decided to do was some research into that fear-inducing phrase, 'pre-nodular inflammation'..... 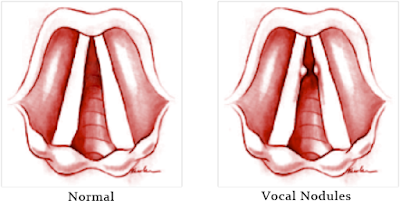 So, What are 'Pre-Nodules', and how do they affect a singer?
First of all, there is a difference between 'pre-nodules' and 'nodules'. A vocal cord 'nodule' is a small, inflammatory or fibrous growth that develops on the vocal cords of people who constantly strain their voices (either through bad technique or for long periods of time). There are also two types of nodules: 'soft nodules' for which treatment requires modification of voice habits, and referral to a knowledgeable vocal technique teacher, and 'hard nodules' which are more advanced cases and usually require surgery to remove the growth area. Vocal rest is also required in both cases. Vocal cord 'pre-nodules', is also an inflammatory area that develops on the vocal cords, but, significantly, has not yet progressed into a true vocal nodule, and is merely an area of irritation. Again, they respond very well to good singing technique, general vocal health care, and conservation of the voice (no straining, overuse or talking/singing too loudly). Treatment for 'pre-nodules' requires much the same treatment as 'nodules': modification of voice habits, and referral to a knowledgeable vocal technique teacher. Resting the vocal cords a bit by allowing little speaking/singing for several weeks may also permit the pre-nodules to shrink and completely disappear.

Learning this information certainly was eye-opening for me. There was a whole other side of nodules that I didn't even know about, but, in hindsight, makes sense. Of course there's such a thing as pre-nodules, given that a nodule is accumulative, it doesn't just spring up, so it stands to reason that there must be an initial warning sign stage. I made a decision that I needed some vocal rest, not through fear, but purely because, when I thought back to the last time I actually had time off from both teaching and performing, I started to realize it was a fair few years ago - I made up my mind that some TLC was most definitely needed. I had my SLT appointments booked up for November and December, rehearsals for an upcoming show would stop for December, my teaching would stop over the two weeks of Christmas and New Year, and the only gigs I have booked in those two holiday weeks were for piano only: and ideal time to say 'I'm giving my voice a rest'.
- Hopefully, with the upcoming information I'll get from my Speech and Langauge sessions, and a two week rest period to iron out any fatigue, my vocal crack will be irradicated - for good!