After experiencing some vocal issues that hit a climax in the summer of 2015, I decided that I needed to take action. After two doctor visits and a referral to an ENT, I got an initial diagnosis of 'excessively dry vocal folds' and 'pre-nodular inflammation'. The next stage was a referral to a Speech and Language Therapist (SLT).

November 2015:
November saw my initial SLT appointment. Be prepared, if you're ever referred for an SLT session, the first session will be in a group of people, usually those with similar issues to yourself, with the view to imparting a chunk of general information to several people at once. In my group session however, there were only two of us (meant to be 4-5) due to illness or whatever. In a way this was kind of nice, as myself and the other patient got to ask more in-depth questions, and as a result our SLT learned more about us for our one-to-one sessions. Two things popped up in this group session at opened my eyes, the first of which was throat clearing. It's something I wasn't even minutely aware I was doing, but something that the SLT picked up on straight away, and something she said we would address in our one-to-one sessions. The other was the concept of how much water to drink - we all hear it all the time on various guises, "8 glasses of water" or "2 liters a day" (which, I can tell you, are the same thing - a 'glass' is 250ml, therefore 8 of them is 2 litres), but the insightful part was the concept of 'cold drinks to hot drinks' - hot drinks are actually dehydrating, and if they're caffeinated and diuretics like coffee or tea, even more so - essentially, the ratio is 3:1 - so for every cup of coffee/you drink, you should have 3 cups of water to balance it out, and depending on the drink the ratio changes (herbal tea is more like 2:1, and fizzy drinks are also considered a 2:1 ratio) - Interestingly though, after figuring out that my water consumption was actually quite good (not fantastic, but good enough to warrant adequate hyradration) the SLT said there may be another cause to my dry throat that we would need to explore in more detail in our one-to-ones. I left the session feeling much, much better about my situation than previously, and decided to my a conscious effort to increase my water consumption (whilst simultaneously decreasing my coffee and fizzy drink consumption), and to stop clearing my throat. I've always said, "half the battle in changing a bad habit is being aware of it in the first place." Many singing students I teach often have a bad habit of putting H's in front of vowels, or swooping slightly at the start of phrases, and I always say that, if you're aware of the problem, you can change it. Don't beat yourself up if you slip up, just remind yourself that it is something that needs to change and endeavour to do better next time. 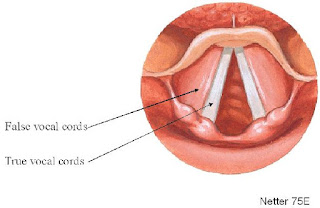 December 2015:
The 1st December saw my first individual session. To start this session my SLT got me to do some simple exercises (sustaining long vowel sounds, sliding through my range, reciting a passage of speech etc) whilst she recorded me and assessed the quality of my voice. The first outcomes were good ones: my speaking voice is in the correct position for me (not too high or low), my range is very wide and well sustained, and I have excellent breath control (gold star to me!). However, she then went on to talk about the issues that I was presenting: The vocal pop/crack in my mid-range, which I was very already aware of, and a slight creaking at the ends of my speech, which I was vaguely aware of, but didn't really know what was causing it. My SLT told me that there was some slight restriction of my vocal folds by what are known as 'false' vocal chords. 'False' vocal chords surround the true vocal chords, and are a pair of thick folds of mucous membrane that protect and sit slightly superior to the more delicate true folds. They have a minimal role in normal phonation, but are often used to produce deep sonorous tones in Tibetan chant/Tuvan throat singing, as well as in musical 'screaming/growling' vocal style associated with metal and rock music. What's happening with my voice is that, in that middle area, the false vocal folds are over-activating and crowding my true vocal cords, creating tension (and causing that 'pre-nodular inflammation' the ENT mentioned). I was given some exercises to do that would help relieve the tension and stop the false folds from constricting my true folds. The SLT also told me that, based on my ENT's findings (extreme dryness / slight inflammation), I had what is known as 'Silent Reflux', which was in fact the root source of all my issues - FINALLY! A full diagnosis!! 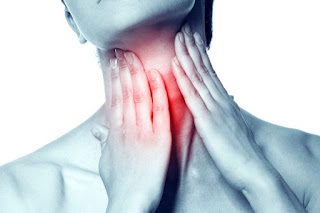 What is 'Silent Reflux', and how does reflux affect a singer?
'Silent', when in the context of an illness or infliction, is a word that baffles most people. 'Silent' implies an invisible or stealth like issue, and I guess that's partly true - I've also suffered from 'Silent Migraines' in the past, which feature the aura (visual disturbances) and post-dome (grogginess/loss of balance etc) parts of a migraine, but not the actual headache! In a way, it's a 'lesser' form of a migraine. In the same respect, 'Silent Reflux', or Laryngopharyngeal Reflux (LPR) can be considered a 'lesser' form of Acid Reflux. It shares some symptoms, with others being absent: The main symptom of acid reflux is heartburn, where the acid in your stomach tries to come back up your oesophagus, and leaves with a painful burning in your chest, and in some cases your throat, and can leave an acid taste at the back of the mouth. Silent reflux is trickier to detect because the heartburn part of the diagnosis is most often absent (only about 10-15% of LPR sufferers ever experience heartburn), and it often causes issues with the throat and back of the mouth rather than the stomach/esophagus. When it comes to treating either, it's not hard to work out that diet is going to be a huge part of it, and certain foods/drinks are really going to effect acid reflux: Red Meats, Dairy, Citrus fruits, Tomatoes, Alcohol, Coffee, Tea, Caffeine, and fizzy drinks (especially diet kinds), and also habitual efforts, like making sure to eat slowly and sensibly, not eating too close to bedtime, making sure not to lie down after a heavy meal (actually, a gentle walk is best after a heavy meal!)

The Future: How do I heal (January 2016 and beyond....)
After my initial SLT session, I had a follow up appointment mid-December which featured more complex exercises that built on what I was already learning/doing, and left that session with the knowledge that there would probably be at least another 4 sessions to follow (6-8 sessions total is pretty usual) in the New Year. As the year drew to a close I set about trying to get into a routine of doing my prescribed SLT exercises, taking my prescribed reflux medication, and doing more research into what else I could do myself. From my research into acid reflux, I quickly realised that the foods that trigger reflux were pretty much identical to the foods that trigger IBS (which, incidentally, I also have). I've been pretty lax with my IBS diet rules the last few years, so it stands to reason that reverting back to being much more strict with my IBS diet will inevitably help a reflux problem. So that means cutting out, or at least significantly limiting: red meat, dairy, alcohol, coffee/tea/caffeine, fizzy drinks, artificial sweeteners, more vigilance in eating the right kind of fibre, and now, in addition, avoiding certain acidic/acid forming foods (certain fruits / high fats etc)
- Some of you may look at that and think, 'that is impossible' - well, it's not, it's totally doable. But, I also know I'm no saint. I was on a 90% strict IBS diet back when I was at university, so I'm not going to beat myself up if I decide to have a glass of wine or coffee with a friend! I spent some time thinking about my lifestyle, and realised it has become much more sedentary over the years due to my many hours spent sat at a piano teaching. And, as sedentary lifestyle can contribute to reflux, I decided an increase in exercise was needed. I also started to get back into the habit of herbal teas to help replace the void of coffee/tea, as well as upping my water intake. Certain teas are also fantastic for inflammation that might come from over-use: Echinacea and Camomile are the best choices if you have a sore throat, and I'm also particularly fond of Dr Stuart's 'Throat Relief Tea' which has a lovely cinnamon flavour.
- additionally, I've made the effort to always have my 'emergency kit' with me, so as to never be caught with a dry throat or a dodgy tummy - this kit consists of:
And finally, in addition to all of that, I spent much of my Christmas/New-Year break researching specific singing techniques that would improve my mid-range: easing the transition between my chest and mix register, and also increasing my volume/power without pushing or straining. I'm pleased to say that all my effort has most certainly been worth it. Not only does my voice feel less constricted and seems much freer when I sing, my vocal pop/crack has been rearing it's ugly head much less frequently, and when it does appear, much less prominently. And it's true what they say, a positive mind-set really does make things improve quicker. I'm now no longer fearing the popping area of my voice, and as a result it seems to be getting better and better so much quicker than I anticipated.

It's certainly been an intense journey for me: frustrating and upsetting at times, and widly fascinating and intriguing at others, and I know there's still so much more to learn! In a way, it feels like an important process I needed to go through, to better understand my own voice. But also, it's given me a new found confidence that I could help someone else in the same situation - it almost feels like professional development! I've learnt so much more about the voice, and I now feel even better equipped to teach others how to use theirs!
Posted by Lydia J Pugh at 01:00