It's a topic that, as a musician, I find crops up again and again - living in a society of '9-5 jobs', if you don't 'conform to the norm' it can greatly hamper your creative juices if your circadian rhythms are out of whack (or, at the very least, are perceived to be....) but just what the hell are they, these 'circadian rhythms'...?

Circadian rhythms are physical, mental and behavioral changes that follow a roughly 24-hour cycle, responding primarily to light and darkness in an organism's environment. They are found in most living things, including animals, plants and many tiny microbes. In us humans, circadian rhythms are your body's natural Sleep/Awake cycle - they tell you when to be awake, and when you're tired. Many things can effect your natural rhythms, such as travel (jet lag), stress, a change in your normal routine, and certain foods (like excess caffeine or sugar). Some people claim that napping during the day can cause you problems with your sleep cycle, but actually, napping doesn't typically effect it. In fact the science suggests that a well timed nap can actually improve your overall health and circadian function. The National Sleep Foundation states that the circadian rhythms in humans dip and rise at different times of the day, so adults' strongest sleep drive generally occurs between 2:00-4:00 am and in the afternoon between 1:00-3:00 pm, although there is some variation depending on whether you are a “morning person” or an “evening person.”


There are three types of circadian rhythms, or 'Sleep Phase Types':

There are also certain sleep disorders that quite often come about from being forced into a routine that does not comply with your own bodies natural sleep phase type - 'Advanced Sleep Phase Type' and 'Delayed Sleep Phase Type' are under dispute as to whether they are disorders. Some doctors refer to them as 'disorders' because the persons body clock doesn't conform to the 'socially accepted' timings of sleep. However, people with these sleep types (like myself, in fact), when left to sleep at a time of their choosing do sleep healthily (the right amount of time and undisturbed). In my opinion, if it's causing a problem to your health because of something you can't control, that's a true and obvious disorder - examples include: 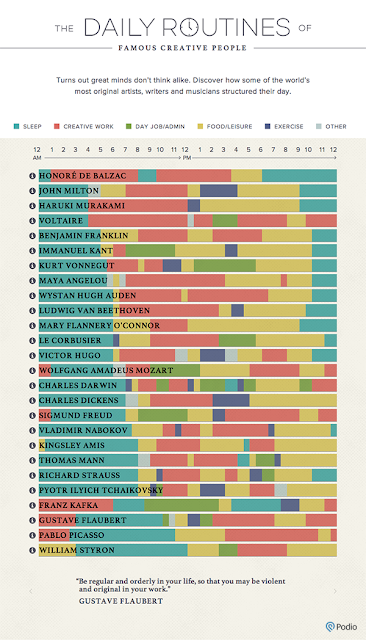 I fall into the category of 'Delayed Sleep Phase Type' (Night Owl) and it is often the type that is typically associated with 'Creative People', particularly those working as musicians, writers and artists. Gigs often run late (sometimes you don't get off stage until gone midnight and still have to pack up and then go home.... and maybe eat!), or you might be doing late sessions in a studio recording an album, and as a composer I find my creativity surge tend to hit me late at night, around 11pm. There's been many a time (especially during my Masters Degree), that I've had a sudden burst of inspiration around about midnight, got to 4am and had to make the big decision: go to sleep and risk losing the ideas, or plough on, pull the all-nighter and try to go to bed earlier the next evening to make up for it.
You can see from the picture opposite that creatively minded people don't have a 'typical rhythm', but there are many that follow similar rhythms. My own rhythms match quite well to Pablo Picasso's, although I'd insert a block of 'Day Job' (working as a vocal coach) between 1-7pm.... which I guess is still creative work if you really think about it!

How does being a night owl effect my daily life?
There are upsides and downsides to having an atypical sleep phase type. The major downside is that, sadly, pretty much everyone needs to work, and if you have a delayed sleep phase type but need to work a 9-5 job, you are going to struggle to find the energy. However, if like me you are self-employed, you have control over your working hours, and can live and work perfectly happily and healthily. 'Productivity of Work' is another benefit. It stands to reason that, if you're sleeping well, you work well, and therefore get more done. I really dislike the pressure that there seems to be for everyone to conform to the '9-5' mentality of modern society, because, clearly, not everyone fits into this particular mold. Experts in circadian rhythms and sleep disorders clearly state that we only need 'typically 8 hours of sleep a day', but they don't specify when you should be sleeping. If I had to work a 9-5 job, I would never be able to do all my composing/songwriting alongside that type of job as well as the performing I want to do. But because my 'day job' is private vocal tuition with atypical hours, it leaves me open to work later in the day (and often into the wee hours of the morning) because I don't need to be 'at work' until 12pm (at the earliest!)

It's also amazing how much stigma is attached to being a Night Owl. I typically get up around 11am each day, but there are some days that I need to be up and about earlier - much to my chagrin, I teach at a music school on a Saturday morning, and need to be ready to teach at 9am. My dad to this day will still say to me, on days I need to be up earlier, 'Oh wow, you're awake then!' - YES, I'm damn well awake - it's not that I can't get up earlier! But it doesn't feel natural (and actually, sometimes, it feels quite painful). And I've lost count of how many times I've heard people say, "Well, can't you just go to bed earlier?..." - NO. It doesn't work like that. And believe me, I've tried. When I get up early every Saturday morning, my body clock still wants to go to bed well after midnight the following evening - going to bed earlier just means lying in bed awake longer. However, a strange plus/negative of being a Night Owl is travel. I've been to the US several times in the last few years, and interestingly I have a very easy time getting into a routine. My 3-4am bedtime in the UK is 10-11pm in New York, which means my 11am get up time is 8am in New York. This is a wonderful benefit for when I attend music courses in the US which have a packed (and early start) schedule.... but inevitably, my body will start to adapt and shift to the new time zone.... which makes the return home VERY painful indeed!

All in all, it's clear that there's a lot about sleep and human routines that goes beyond the 'get 8 hours sleep a day and work 9-5', and I think it's about time that society started to accept and appreciate the types of people that don't conform to the norm. And most importantly, being a Night Owl doesn't mean you're lazy! It just means you operate differently: just like all those incredibly renown creative and intellectually minded people..... it's certainly nothing to lose sleep over.