It's safe to say, I'm into the swing of things now - the timetable, the heat (37C, again, this time with thunder and lightening), and getting back to absorbing and learning - anyone who's been out of education for a while and then got back in will know that it can be hard to get your education mojo running - but I think I've got it down now, and the CNMF guys are actually making it pretty easy to get revved up and into the learning mindset. 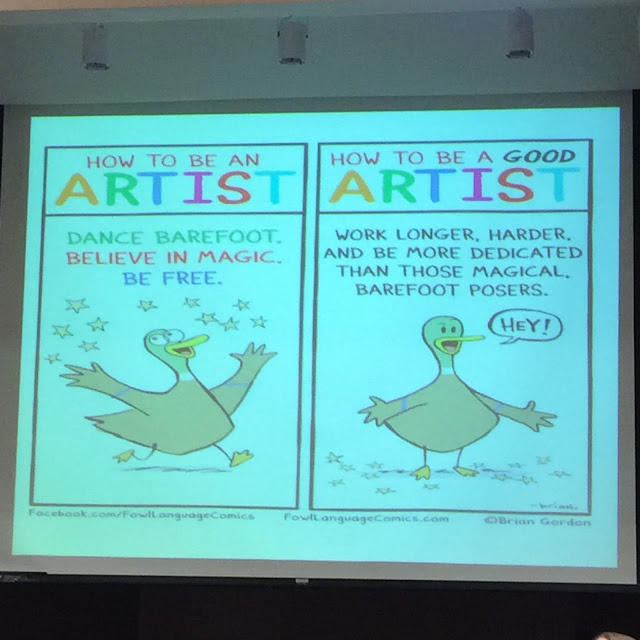 Another set of workshop composer presentations this morning, and first up was Jacob Sandridge. Jacob hails from West Virginia, and openly states that he is influenced by bluegrass and other typical musical styles from the area. Which is what makes his music so interesting really, but I really couldn't hear that influence! What I could hear was his love of creating 'nature' with his music, and the imagery that he induces from his writing. Another composer who uses electronics and extended techniques in his work, and was described by one of course directors as 'fluid with time', in particular I was intrigued by his work 'sieang job ring' (translates as 'frog sounds') based around a musical instrument that a friend brought him back from Thailand (you can hear the piece on his soundcloud page: https://soundcloud.com/jacobsandridge/sieang-kob-rong)

Next up was Chih-Liang Lin (who happens to be my roommate as this festival), whose piece I was mainly struck by was 'Dome of Light' which is inspired by a train station in Taiwan. Chih-Liang created some truly amazing imagery with her piece, and I particularly loved the way she used a build in texture (instrumentation) and dynamics to create the ideas of trains, and people, coming and going. She stated that she wasn't happy with the structure of her piece, and it opened the floor up to discussion about how structure should evolve, and whether you need to be rigid in how you structure a piece, or if you can (as Chih-Liang does) let it evolve purely from the sounds you want to use. It's something to think about, not only from a classical composer viewpoint, but for all songwriters too. Many songwriters get stuck in a set way of how a song should be (must be 3'30, must have a chorus, or a has to be in rhyming couplets etc etc.) I urge any songwriters among you who are maybe struggling to write something really new to step outside your comfort zones a little and take a few risks in what you write. You might surprise yourself.

Something completely different for the final composer of the day was Zack Merritt, who doesn't even really regard himself as a composer, but calls himself an artist. Zack is a performance artist, who uses lighting, projection, soundscapes and himself as a performer to create works or installations. All his work is in fact scored, most of it using notation techniques that he's devised himself. And interesting concept that Zack talked about what that his 'music' tends to be either around 5 minutes, or an hour in duration (with nothing in-between), and the reason for that is that most audiences have a switch-off point at around 5 minutes. If a piece is under or around that, then they enjoy it. If it just continues for an hour, they tend to get 'angry' that something is still happening, but if it goes on long enough they come back round to enjoying the resolution when it finally ends..... no doubt, and interesting way to to think about your work, that's for sure!
- I did really like the concept of another piece of his, 'June 29th' which was inspired by North American storms in 2012 which left many, many homes without power, and subsequently a whole area in chaos. It think his own description and the piece itself can explain it better than I can, so please feel free to listen to it on his website: www.zackmerritt.com (find it under 'chamber pieces')

The afternoon session saw us in discussion with the artistic directors of The Great Noise Ensemble (the group who will be performing my work later in the festival). Another really useful presentation, these guys focused on more of the business aspects of composing, and also creating, sustaining and working within a new music ensemble. As a group, the Great Noise Ensembles aim is to change the way people think about classical music, mainly in the way it is presented (getting dressed up and sit in silence watching musicians who are also dressed uncomfortably.... something like that!) They focused on work ethic, the need to be professional and 'someone who plays well with others', as well as the importance of social media (which they urged us to use as much as possible in order to connect with others). Other great concepts that came from this talk was statements like: "Don't compare your career path to someone else's", and "Don't push yourself (when networking) so hard that you lose all concept of humanity". Valuable lessons to be learned by anyone who is working in the music business. And also, the idea that you CAN still have a job that makes you money AND been an artist, and that you should never let anyone tell you you are not an artist if you need (and want) to make your money elsewhere.

My favourite part of this presentation though had to be the delightfully apt and humorous cartoons. Particularly 'Voltron': a bit like transformers, he's a giant fighting robot that is made up of 5 smaller robot Lions, who when combined are more powerful - much like an ensemble (or a band, even), the whole is greater than the sum of it's parts. A little bit of humour goes a long way to get a message across - and of course now I really want to watch Voltron!

The evening saw the CNMF's Open New Music Night - essentially, an open mic night where absolutely anything goes (although classical contemporary is encouraged). And boy, nobody held back at this! I'm pretty sure absolutely all bases were covered. We had Olivia Keiffer and Adam Scott Neal performing a two pianos piece, a solo Oboe piece by Britten performed by Trey Makler, a performance art piece from Zack Merritt, and even some utterly random improvisation. I myself got up to perform my piece 'Sigh No More' - a setting of Shakespeare's song from 'Much Ado about Nothing'. And I'm super happy to say it went down and absolute storm. I believe I heard the phrase 'that was badass' about four times, and I even had one fellow composer ask me to marry him because he loved it so much (....I did have to let him down gently on that one, but I'm still incredibly flattered!). You always hope something will be well received, but I really didn't expect the ovation that I got, so I'm super pumped to continue with my idea of creating a whole album of 'Lounge Shakespeare' - more info on that as it develops, but in the meantime, have a listen to 'Sigh No More' on my soundcloud page:
https://soundcloud.com/lydia-jane-pugh/sigh-no-more

It's been a really productive and epic day, with so many highlights. I am thoroughly enjoying myself
here in Charlotte: every day here brings something new and exciting, and I've got the added bonus of doing it all surrounded by awesome people, and today I even saw some squirrels (which to Guernsey people is the most exciting thing in the world, because we don't have any on the island!). The cog is turning, the ball is rolling, and to quote Oliver Twist: "Please Sir, I want some more!"
Posted by Lydia J Pugh at 13:30