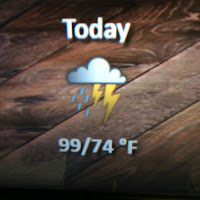 Another day, another scorcher (37C/99F.... I'm waiting for it to tip into 100 any second now....), I thought I'd start this post just talking a little bit about the social side of the workshop. This bunch of composers are a really awesome group of people, and I don't think there's been a single night where I haven't just been able to sit and talk to anyone, or have a few drinks and a giggle. There's also a couple of really great little places near CPCC to get lunch or coffee (City Deli, and Crown Coffee Shop & Pub, which actually share the same building, are the places which immediately spring to mind), and it's great to just take the time at lunch to sit and get to know everyone in such a relaxed way - but it must be said, I do enjoy the daily car rides about Charlotte. A lot of banter happens on these rides, and I have to do a shout out to 'the boys' (Jeff, Dan and Clay) - you don't half make things hilarious! #bantermobile

Calvin Hitchcock was first up today with his presentation. I've gotten to know Calvin quite well over these first couple of days (mainly through our mutual love of the musical 'The Last Five Years'), so I was anticipating that Calvin's musical style would be closer to mine than the composers who have presented so far - and I was right: Calvin's style has a lot more emphasis on melody and harmony than most of the others, although I would say his harmonic language is still further out there than mine might be! Calvin's first piece was work based on the Salem witch trials for vocal ensemble and percussion, and I really love his use of lyrics, and the effective use of percussion in this piece. His work which really stuck with me though was 'Water Phase II', a piece for solo cello and piano. I thought this was so beautiful and evocative, with such well written lines for the cello, and a great 'seagull effect' technique (originally conceived by George Crumb, and something I want to make use of at some point). I loved this piece, and I highly recommend you listen to it: https://soundcloud.com/calvin_hitchcock/water-phase-ii

Next up was Johnathan Newmark. John is the oldest of the composers taking part in the workshop, by a fair decade or so, and I think this shows in his music - not because his work is dated or anything like that, but I felt I could hear the depth of experience that he has in his writing, in particular his works 'Asking For It', and 'String Trio - With Attitude', the latter of which really resonated with me. This piece was written 18 years ago which Johnathan was in Saudi Arabia (where it was illegal to perform music), and I could really hear the frustrations of a musician and composer repressed in this way, and I found it truly fascinating. Johnathan has talked earlier in the week about the 'New Music Mafia' back in the late 1960's, a time when essentially all new music had to be done a certain way, and it cause him to give up and chose a different career path. Years later he has now returned to music, and I think this has given his music something really unique in that it's been on such a long roared journey to get to this point. Johnathan also went on to say in his presentation just how lucky us younger composers are at this time, as new music is now so much more diverse, and we can write in ways that just were not allowed back then. Amazing things to think about.

Last up in the morning session was Niki Harlafti, originally from Greece and studying in the US. Niki's style has much more of that of other composers from earlier in the week, particularly in the way she uses extended techniques, although (despite her music's dissonance) she stated that she disliked 'clusters for no reason.' In particular, I found Niki's 'Scenes for Violin' a really captivating work. The movement we heard (entitled 'Scenes from a patients bed') used the violin in such a way that was really uncomfortable for the listener. But that is what made it so interesting. Another composer described the piece as invoking the imagery of "someone who is in extreme pain, but required to remain still", which I think is a bang on description. Niki's other main work she discussed was a piece that was written for the Loadbang Ensemble (who are also in-residence at this festival) entitled "Two Flies", which I really enjoyed the theatricality of.

The afternoons session was a presentation by Marc Mellits, in which he played us his music and discussed his approaches to composition, and how to generate income from your work in a variety of ways. Marc's presentation really resonated with me, and I felt like I absorbed so much from him. His music is also beautiful, in particular his piece 'Mara's Lullaby' from a work entitled 'Tight Sweater' (and yes, his title names are somewhat strange and humorous, but that is half the charm and fun in his work). This piece had me literally to the point of goosebumps and in fact welling up a little bit - I am so happy I now know this piece exists!
- Please have a listen to it: https://www.youtube.com/watch?v=k7nKg_kV9EE
Interestingly, this presentation has struck up a lot of debate amongst the composers at the workshop. Talking amongst the group there's some who really didn't agree with Marc's thoughts about music, and I can understand why. And, also, that's okay, everyone's entitled to their opinion - I'm just very glad that everyone also goes on to explain their viewpoint here at the festival, as (certainly for me) that doesn't take anything away from the presentations, it only adds to the learning experience.
- One particular topic that I personally found really interesting in Marc's presentation was the idea about finding your voice/sound as a composer (or indeed, musician). Marc stated that, if you go searching for your voice, then it will allude you and you won't find it. If you stop looking and just keep making music it will find you. I think there is so much truth to that, and it applies to any musician, across all genres. You can tell when someone is trying to sound a certain way, and again when it is naturally generated by who the are. Something very deep for all to consider, I feel.

The evening's entertainment today was a Dance Concert. As part of the festival some of the composers are collaborating with choreographers for a concert that will happen on the 27th June, so this was a great insight into the world that these guys are entering over the week (and I will talk more about it in due course). I actually have training as a dancer (ballet, tap, modern), so I've been to, and been in, many a dance concert, and it is absolutely worth mentioning that these young dancers have so much strength and ability. I personally found, however, that most of the time the choreography  didn't match the music, OR wasn't contrapuntal enough. I guess I'm similar in my musical preferences, and many of my friends will tell you I can be quite black and white about things like that. This opinion, of course, is in no way to discredit the skill involved by the choreographers and dancers, I just found most of the dances pieces didn't quite click for me today - I am really looking forward to seeing what the workshop composers can come up with though!
- One final highlight of the concert had to be the 'Improvisation', which not only featured the dancers improvising, but it was opened up to the composers to get involved and play in any way they deemed appropriate.... which saw four men and one woman all playing the piano (or bits of it) in pretty much anyway you could imagine: classic melody, string dampening, taking bits off it and stamping on the floor, and opening and shutting anything that had a hinge.

It certainly has been another eventful day here in Charlotte: music, dance, debate, it's all there - but let us not forget, of course, the delightful and much enjoyed social banter - for where would we be without that!